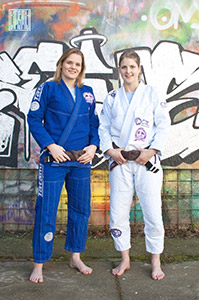 ​Both Laura and Marjolein have been active in martial artists as long as they live. They started taking judo classes when they were 5 years old and have enthousiastically practiced the art for many years resulting in a black belt for both women at a young age. However, the moment they came in contact with Brazilian Jiu Jitsu they were hooked and they can often be found in one of the Gracie Barra Netherlands locations ever since.

Their mutual passion for the art led to the fact that they wanted to show more females the beauty of BJJ. Not in the last place because they found it fun to train with females on a more regular basis instead of always being a minority in a class full of men. The fact that Laura and Marjolein often trained and competed together made it easy for them to take the step to collaborate and create the Female Fighter Foundation. The foundation helps them to put all their energy in organizing BJJ events for females only throughout the Netherlands.